Panthers are not quitting

Share All sharing options for: Panthers are not quitting 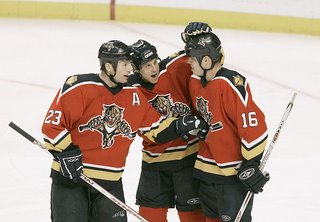 So let me get this straight: The hottest team in the East right now is the Florida Panthers?! They are quietly sneaking up on the rest of the mid-lower Eastern Conference pack and are 7-1-2 in their last 10 games and trail the 8th place Hurricanes by 4 points. Ever since the trade deadline on February 24, the Panthers have won 6 and lost 1. What is it about losing the likes of Gary Roberts and Todd Bertuzzi that struck a chord with this team and turned them into winners again? Was it just the awakening in the aftermath? Is it because they now have their backs against the wall and have 'nothing' to lose?
In their past 7 games:
- Olli Jokinen has 7 goals and 3 assists.
- Martin Gelinas has 1 goal and 7 assists.
- Chris Gratton has 3 goals and 4 assists.
- Stephen Weiss has 3 goals and 4 assists.
- Nathan Horton has 4 goals and 1 assist.
- In the month of March, Eddie 'The Fossil' Belfour is 3-1, has a 1.99 GAA and a .935 save percentage. 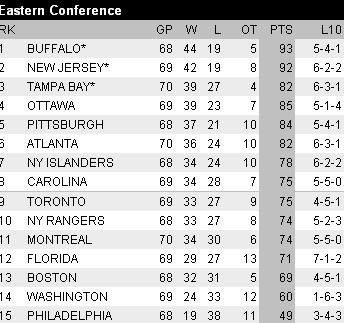 Where the hell were these guys all year? This is a repetition of what they did last season at around the same time, and you have to wonder if it is too late once again. Or will they stand together and fight until the very end?
It is going to take some luck and some help along the way. But they still control their fate mostly themselves:
In their final 13 games they play:
- the Hurricanes 3 times
- the Capitals twice
- the Lightning twice
- The Sabres, Flyers, Senators, Islanders, Devils, and Thrashers once.

So do the Panthers have a chance? Are the Islanders or Hurricanes, who hold the 7th and 8th spots in the East respectively, going to lose often enough that Florida can catch them? I doubt it. But stranger things have happened I'm sure.
Coach Jacques Martin understands the reality:

"We're making a push. Bottom line, we know we have to win almost every game," Martin said. "There's a better level of urgency, but also much better execution. And our goaltending has been really big."