Share All sharing options for: North Bay Ontario is Hockeyville 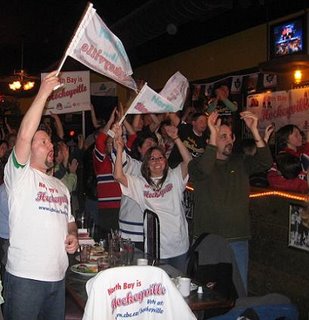 Gary Bettman announced North Bay the winner after the Leafs-Habs game last night. Cornwall came in second. Way to go, Robert! North Bay gets $50,000 for arena upgrades, the pre-season NHL exhibition game between the New York Islanders and the Atlanta Thrashers on September 17, and the city will also be featured in a national one-hour CBC Television special to air in the fall.

The community reached out to displaced Hurricane Katrina children by asking them to join their annual pond hockey tournament. North Bay embraced the unique initiative as sponsors paid for their flights, accommodations and meals during the three-day trip.

I guess that really helped their cause.
There really is much that I can say right now that won't sound like poor sportsmanship, so I will say congratulations to the city of North Bay. Feel free to sound off any joys or frustrations in the comments section.