March of the Penguins

Share All sharing options for: March of the Penguins 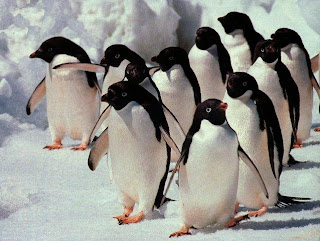 And so begins their quest for the cup. Pittsburgh caught a break last night against the Rangers, barely edging out a game they had no business winning. Lucky for them they have a player by the likes of Jordan Stall, who seems to have a knack for scoring short-handed goals, and a player by the likes of Sidney Crosby, who seems to have a devastating affect on shootouts. Don't be fooled though, these two players alone will not win them even the first round in the playoffs, so the young team with an endless supply of talent didn't hurt themselves by being active at and around the trade deadline. Grabbing the services of veterans Gary Roberts and Georges Laraque was sick. Not only do they both look like they are going to fit right in, with Roberts on the line with Crosby, and the take no prisoners playing style Laraque brings to the table, Crosby shouldn't be losing anymore sleep at night worrying about who's going to plaster him to the boards next.

Every team has a weakness though, and for Pittsburgh, it might just be goal tending. Marc-Andre Fleury is letting in a mass amount of goals lately, and Jocelyn Thibault isn't looking much better. I don't think either of these guys are ready for the playoffs, but I've been surprised before. With 14 million to spare though, they could have bought pretty much any goalie they wanted. Just take a look at what Biron was sent away for. Anyway, instead, the Penguins went out and got Nolan Schaefer from the Sharks. Nolan Schaefer has played 7 games in the NHL. He was 5-1-0 with a 1.88 goals against average. Great numbers, but he was looking for the backup job over in San Jose, what he does in Pittsburgh remains to be seen. Would I want to be the team to play these guys in the 1st round? Not a chance, and whoever does has definitely got their work cut out for them.