Share All sharing options for: Lightning come to GM Place: Nucks and Bolts 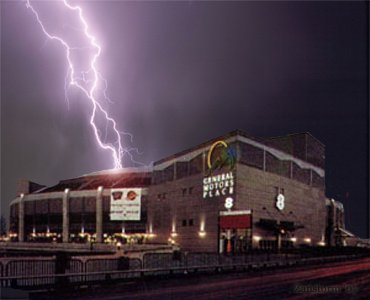 Tonight's game is a rarity. The Lightning and Canucks have not played eachother for over 3 years. But both teams have a few things in common.
The Nucks and Bolts are both in tight races to hold onto their top spots in their respective divisions. The Lightning have Atlanta breathing down their necks in the Southeast Division. The Canucks have held off both Calgary and Minnesota for top spot in the Northwest since February 10. Worthy of applause.
The Lightning have 38 wins, the Canucks have 37.
The Lightning are 11-3-2 since January 30. The Canucks are 8-1-1 since February 10.
The differences between the two teams? The Canucks have a world-class goalie and the Bolts don't. Marc Denis struggled in his last outing in Florida, as the Panthers squashed them 6-2. The Canucks beat the Wild 4-3 in a super-emotional game in their last outing.
So, what to expect? No damned idea. The Canucks will have to clog up the neutral zone and not give Lecavalier, St. Louis, Richards, and Prospal any chance to get a skating game going. Vancouver is good at that. They will also have to stay the hell out of the penalty box. Tampa is a powerplay threat, no doubt, and the Nucks' PK is going south all of a sudden.

Prediction?
5-4 Canucks. We have had great success against Eastern teams this season (6-2).

Patrick Coulombe has been assigned to the Victoria Salmon Kings

It appears that Luongo and Sabourin could be splitting goaltending duties more often from this point on in order to keep Luongo fresh for the playoffs.

"I feel like I could play every game from here on in," Luongo said. "I feel good. Last year at this time, I was very fatigued mentally and physically and, right now, I don't feel like that at all. I guess the playoff drive is keeping the energy level up and the excitement going."

Sabourin could get the start in goal for the Canucks on Thursday against the Coyotes. But he could start tonight if Luongo is still suffering from the flu. Vigneault is not revealing his answer yet today.