Share All sharing options for: Leafs almost have no business making playoffs anyway 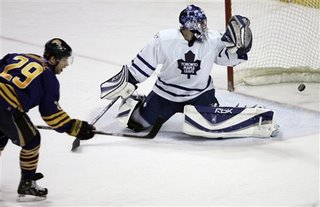 How can a team be so inconsistent? On a night where the Stajan-Steen and especially Boyd Deveraux line was flying, and the Leafs looked to be playing a decent team game defensively, they blew a 4-1 lead in the 3rd period. In a game they had to win. But it was an unfortunate series of events that rattled the Leafs out of their composure. Devereaux's 2nd goal of the night to make it 4-1 early in the 3rd, was the direct result of a Sabre player clearing the puck behind his net and the puck going off a ref's kneecap and right in front of the net to Devereaux....who buried it. Times were so good for the Leafs for that moment. They were going to kick Buffalo's ass weren't they? They had found their groove back and were going to storm into the playoffs.
Nope. The refs made amends for assisting on Devereaux's goal and called a tripping penalty on Pavel Kubina less than one minute later. You knew it would happen. Thomas Vanek scored on the PP less than a minute after that, and the Sabres took over the momentum. That was when the Leafs' team defensive game died. Suddenly they were skating in their own zone like chickens with their heads cut off, making stupid mistakes, and to make matters worse: the Sabres were skating like someone had put crack in their water bottles.
Not to sound like a broken record, but this Leafs team doesn't 'have it.' Buffalo should do them a favor tonight and beat them soundly just to put them out of their misery. At least with another missed playoff run, maybe there will be some serious changes to the Leafs organization.
This group is
-not looking accountable to eachother
-has no commitment to playing a full 60-minutes
-suffers from brain cramps, especially that low-IQ defence
-needs to be dismantled if players are not going to play as a unit
-or needs another former cop to coach them.

Holy Mackinaw! These guys are still blaming Raycroft! Give me a break! They keep blaming the goaltending and expect him to bail out the team every time the guys give up 2-on 1's and 3-on 1's, which is about 10 times per game on average I'll bet. No? Oh sorry, 20 times per game. Raycroft can't be faulted for this.

Ooo! Here are some megastats on both the Leafs and Sabres. (The Tale of the Tape)

Enjoy the game! It could decide the Leafs' fate. The Rangers won today, putting them 5 points ahead of the Leafs in 7th spot. It seems that the Leafs can only catch the Islanders, who are the 8th spot 'holder of the moment' and are 3 points ahead. Pressure to win tonight? Abso-fricking-lutely. Chances of success? Slim.