Josh Green out for 4-6 weeks

Share All sharing options for: Josh Green out for 4-6 weeks

From Canucks and Beyond:

"He [Ballard] kind of submarined me a bit and it was kind of a dangerous play and nothing good can come out of that," said Green, who will be sidelined four to six weeks.

Well this is unfortunate. Green has been perhaps the Canucks' most consistent gritty player. Green plays hard nonstop, something the team has not been doing much of lately. So I guess the question now is: Who is going to replace Green? Please tell me it's not Tommi Santala! 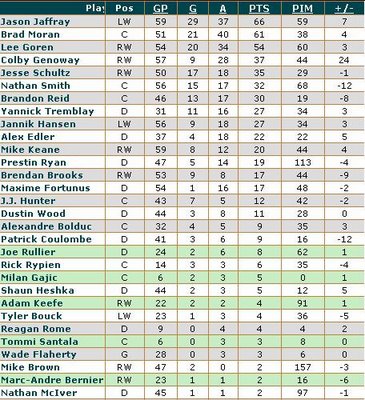 If Vigneault has abandoned hopes of centers Brad Moran and Brandon Reid cracking the Canucks' lineup again this season, perhaps we can get a look at Jason Jaffray, a 25 year-old winger who's leading the team in scoring.
Maybe Lee Goren deserves another crack at the team. His point-a-game stats are impressive as well.
Just not Santala!~ Don't do it, Vigneault!
We'll find out tomorrow!

(Stats are from the Moose Official Site.)