Share All sharing options for: Janssen gets 3 game suspension 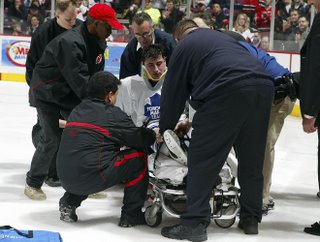 The NHL ruled today that Devils' goon Cam Janssen will recieve a 3-game suspension for his hit on Tomas Kaberle last night. After reviewing the clip, it's pretty obvious that the hit was late. It was a hell of a hit, but Janssen's timing was way off. It is expected that Kaberle will miss 1-2 weeks with a head injury, as it seemed that Janssen hit Kaberle's head, and the Leafs' defenceman hit his head on the boards as well. Hats off to the Devils players who tapped their sticks on the ice after Kaberle was taken off on a stretcher. A big fuck you to Janssen for looking unremorseful. Of course, he was jawing at Tucker at the time. But hey, Janssen is a good tough guy to have on your team, but he really has the mental capacity if a peanut.
The hit occured in the 2nd period. The Leafs were down 2-0 after 2 periods. Full marks to them for storming back through adversity in the 3rd. And the Leafs' defencemen picked up the slack especially in Kaberle's absence. Carlo Colaiacovo scored on the rush on a mini breakaway after a sweet pass from Alex Steen, making it 2-1. Nik Antropov tipped in an Ian White point shot for a powerplay marker 2 minutes later. Matt Stajan tipped in a Hal Gill point shot a minute after that.
The Devils tied the game with under 2 minutes to go, after Bryan McCabe coughed the puck up on a clear out attempt. Bloody McCabe. Even the Devils' announcers had a dog house comment about him after that disaster.
Oh well. Leave it to Jeff O'Neil to bag the winner in a shootout, keeping the Leafs in the playoff hunt in the East.

Let's see how the Leafs play against the depleted Sabres team tonight...

My call: Renewed confidence and a 4-3 win. This one is going to be a beauty.