How the Carter has fallen!

Share All sharing options for: How the Carter has fallen! 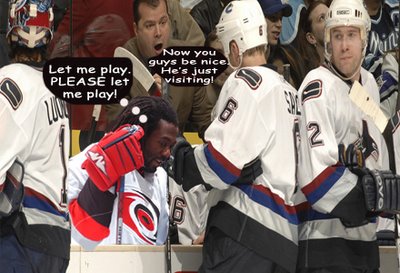 Anson Carter just can't seem to find himself a home...anywhere. He was benched last Friday to make room for the returning Eric Cole and Ray Whitney, didn't play on Sunday, and doesn't seem to be playing tonight against Florida either.
At least the Hurricanes are not paying alot of his $2.5 million salary! It seems that ever since Carter and his agent inflated his salary in the summer when they left Vancouver, expectations have swiftly risen for him, and he really has not found his game since. Do I feel bad for him? No. He should have stayed where the grass was greener for less 'green'.
What will become of Carter in the offseason? Is any team going to bite on that salary? As long as there are enough stupid GM's out there, the answer is 'quite possibly.'
Until then, Carter is going to perhaps ride the pine in Carolina until someone else gets hurt.
Below are his stats in his first 5 games with Carolina. Yiee. It ain't pretty.