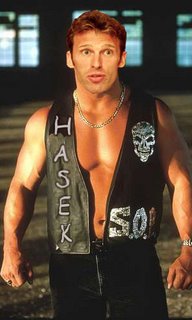 Hasek 3:16 says: "I'm going to Wrestlemania!" Saw this bit on Kukla's, referring to an article at Detroit News.com. Since Wrestlemania 23 will be held in Detroit this year, Hasek will play against the Blue Jackets that day (April 1st), and then race to the Ford Field, the venue of the event.

"I used to watch (wrestling) a lot more, but through the years, I've stopped a little bit," Hasek said. "But when I heard that Donald Trump was in WrestleMania, and may have to shave his head, I watched it the last few weeks."

It's almost as if the stupid interviewer asked him if he knows that wrestling is fake:

"You know everything is made up, everything is about the story, but if you go and have good seats, you see these big guys and they're good athletes," Hasek said. "They can jump, do flips -- I was amazed. They're huge, 6-foot-4, even 7-feet tall, and they're like gymnasts. It's a hard sport, I tell you."

Hasek then stated that his faves were The Rock and Stone Cold Steve Austin, and that was when he was the biggest fan of the WWE.
Common sense says that Donald Trump will not be getting his head shaved at the event, but rather Vince McMahon will be "taking one for the team."
Trump has such a pathetic ego, and would never shave his head. Vince is using this head shaving match as the big draw, but really, who gives a shite if one of them gets their head shaved or not?
This will be the first Wrestlemania that I won't watch live in years.