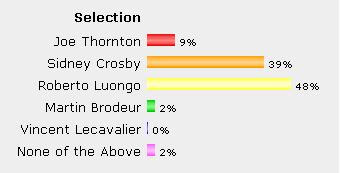 That's it. I'm pulling this poll off the sidebar. It appears that 48% of you are:

Hey, I hate Crosby and hate to defend him on most occasions. But when it comes to the Hart Trophy, I think Crosby has it locked up. And that is just my opinion.
Contrary to what most Nuck fans may think, I would not say Luongo is more valuable to the Canucks than Crosby is to the success of the Penguins. Luongo has been great, yes, but the team has been generally superb in front of him. They aren't calling us the New Jersey Devils of the West for nothing!
If anything, Alain Vigneault should win the Jack Adams Award as coach of the year, and perhaps Luongo should win the Vezina.
It's just my opinion. You can butcher me in the comments section all you want. But I stand by my opinion unless someone can prove me wrong.