Forsberg back to scoring

Share All sharing options for: Forsberg back to scoring 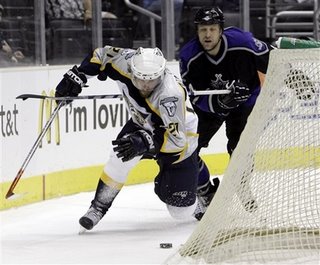 It seems as though Peter Forsberg's knack for putting up points has finally returned. He had 3 assists in the Predator's 6-3 whooping of Los Angeles this afternoon. Before today's game, Forsberg only had 1 goal and 2 assists in his first 5 games with Nashville. 3 points today gives him 6 points in 6 games. Amazing how one great game can alter stats and perception. Prior to checking NHL.com's boxscore of the Kings/Preds game, I was thinking about posting another Forsberg futility photoshop, comparing his points total to Scottie Upshall's stats. Scrap that idea.
Looks like Peter the Great is finding his touch in Nashville...oh great.

By the way, Upshall now has 4 points in 6 games with the Flyers, including 1 game winner.
Despite Forsberg's offesive drought, the Predators were still 5-1 since acquiring him.