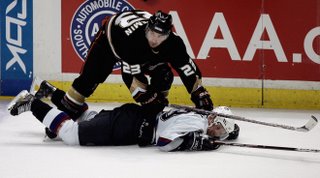 In a game where the 2 teams combined for 104 penalty minutes, the Canucks lacked intensity for the most part, especially in the first period. They looked to be playing in slow motion, like they just woke up from a deep slumber. Although the shots were 10-10 in the first, the Ducks built a 3-1 lead for themselves, and really didn't look back after that.
The Canucks woke up in a sense after Corey Perry (Dustin Penner, actually) pushed Tommi Santala almost head-first into the boards, prompting Kevin Bieksa to rough up Penner a little. Not even a fucking penalty called on that play. To be honest though, a part of me hoped that Santala wouldn't return after that! I was drooling over the options of who Vigneault would call up from Manitoba in Santala's long term absence. Santala barely missed a shift. Damn! Santala still can't bury the biscuit either...even after 2 wide open net chances. Fucker.
The rough stuff started after the hit on Santala, and the Nucks woke up. But it was too late. Looking lame on the PP for the most part didn't help either.
Not keeping up with the Ducks' speed and size didn't help.
The Naslund-Smolinski-Bulis line looking pathetic didn't help.
Taking stupid penalties didn't help.
So, chalk it up as an OFF NIGHT. 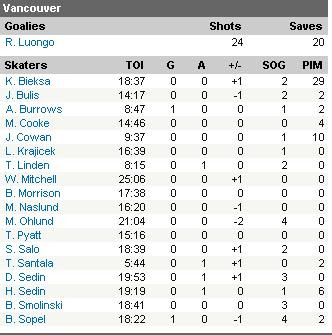