Don't count Florida out quite yet

Share All sharing options for: Don't count Florida out quite yet 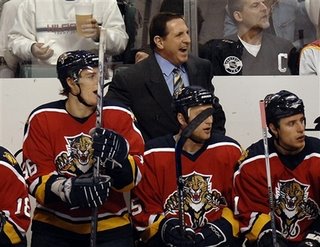 Well, it's almost time to throw the white towel in on their season. It is a tall order to ask them to win over 80% of their last 16 games. The Panthers play the Thrashers 3 more times, and have lost all 5 games to Atlanta this season. Ding.
They play the Hurricanes 3 more times as well. In 5 games against the Hurricanes this season, the Panthers have only won ONE. Ding.
A glance at the standings (below) shows the Panthers are terrific at home and lousy on the road. They have 8 home games and 8 road games left. Ding.
At about the same time last season, Florida won 11 of 13 games, including 7 in a row. But they finished the season 3 games over .500 and 7 points out of a playoff spot.
On second thought, Florida is hooped. Count them out. They are doomed! This team has to quit stabbing itself in the foot and putting themselves out of contention earlier in the season. 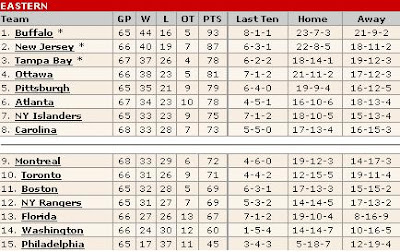