Share All sharing options for: Cut Andrew Raycoft a bit of slack 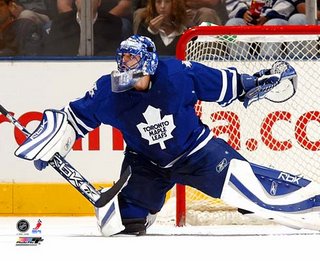 Damien Cox wrote a piece in the Toronto Star yesterday about the Leafs' chances of making the postseason. At least at the end of his article he generally spoke the truth about the team's play:

A team that is among the worst in the league defensively and can't win at home has some obvious, basic solutions at hand.
Get the goals-against down. Find some fighting spirit at home. The trading deadline, after all, didn't decide anything. Not yet, anyway. (referring to Yanic Perrault)

What had angered me was what he said earlier in his article about Andrew Raycroft:

So there may well be three berths available and six teams in the fight.
And the Leafs are right in the thick of it. Now, they won't be for much longer if their goaltending, specifically Andrew Raycroft, is going to go south.


Poor Raycroft. Sure he struggles from time to time. But he sure as hell doesn't struggle as much as the rest of the team struggles to play sound defensive hockey. Ah yes, the achilles heel of the Leafs since Pat Burns ceased being their coach in 1996. Burns had the Leafs going deep into the playoffs and on a record winning streak back then with their stingy defence in front of Felix Potvin. The Quinn era changed that into run and gun balls to the wall hockey. Somewhere in there the teams' defence-first mentality was lost and only sporadically recovered.
Unless Paul Maurice has changed his strategy from his days in Carolina (suffocating defence), which to some degree I'm sure he has, then this team is not buying into his system. I mean, Maurice took a Hurricane team to the finals with Arturs Irbe in net for f***'s sake!
He could do the same with this Leafs team if they knew their damned roles. I've seen Raycroft play miraculous and hung out to dry alot more than I've seen him lose games for Toronto this season. Remember how stupendous Curtis Joseph and Ed Belfour had to be for the Leafs to succeed? Those types of goaltending performances don't come around all that often. Mediocre defensive play in front of great goaltending performances like that do not win Stanley Cups. The Leafs have looked atrocious in their own zone and have been caught pinching for too damned long now. Enough is enough.
At least the fans are finally tearing into Mccabe more often, as he especially is coughing the puck up, foolishly pinching in and getting caught, and taking needless penalties.
It's time for this team to rid itself of the boneheads who don't want to play their coach's system. And believe me, that is a sure shot statement coming from a guy who is seeing a team in Vancouver thrive on everything that the Leaf team is NOT this season.
The ultimate Leafs defensive breakdown is on the following clip: