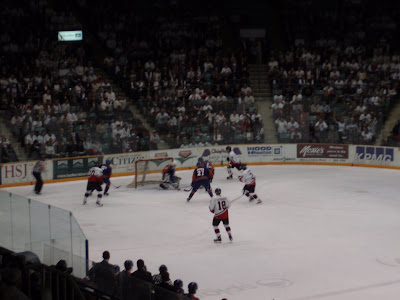 The Cougars are for real it seems, after defeating the Kamloops Blazers 4-3 in OT to sweep the series 4 games to 0. They are heading to the final round against presumably the Vancouver Giants for the Memorial Cup.
I was at game 3 to watch the Cats erase a 3-2 deficit and defeat the Blazers 4-3 late in the 3rd period. But I don't want to get into the recap of the game as much, but rather, tell you briefly about the experience.
First off, the company I work for has connections, and we got a suite. That meant free booze, food, and luxury.
I pulled out my camera to take some pics of the action in the 1st period, and the lady sitting next to me warned me: "A friend of mine was taking pictures a few weeks back, and security approached her and told her to erase all of the pictures and put the camera away." 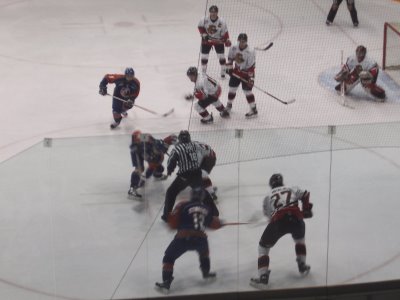 I thought maybe she was bluffing (and that nobody would catch me) so I proceeded to snap some shots minus the flash to avoid drawing any attention to myself. Lo and behold, in the first intermission security came up to the suite and started questioning me. I played stupid at first, saying "Oh really? No way!" I didn't know that." And the security lady shrugged her shoulders when I asked her why I wasn't allowed to take pics. Bullshit I'm sure. So I said: "Sure, I'll erase the pictures right away, no problem." But I was faking it. I kept all of them and two of them are posted here. I think that Wild Cat, the team mascot ratted me out...little fucker.
Was it a copyright infringement? How can it be ok to snap pictures at a Canucks game and NOT a Cougars game? Oh well. Fuck'em.
There were maybe 4700 people at the game, and a bunch of empty seats. Unreal, empty seats at a WHL playoff game. Some fans I talked to said that it was a rebuttal from fans because they didn't like Cougar's management because of the usual reasons:
-being cheap
-not assembling a good team as a result
-the owner doesn't even live in Prince George, and never shows his face.

My initial response is: Suck it up!!! Your home team has just swept a team that finished 12 points ahead of you in the standings and is going to the Memorial Cup final! Where is the damned love? Pathetic.
On top of that, the Cougars have a terrific duo up front in Jared Walker (a Hawks prospect)and Devin Setoguchi (a Sharks prospect). Setoguchi looked dominant out there. He's way ahead of everyone else.
The game itself was pretty damned good. Lots of skill, some decent hits. There was no fighting though, and most noticeably, no obstruction.
A giant Cougars defenceman named Vladimir Michalik really wasn't all that impressive. His shifts were too long, he floated too much, and he did not use any of his 6'8" 241-pound frame...at all, much like some of the fans warned me. They weren't kidding. They said he was the exact opposite of Zdeno Chara, who obliterated players when he played for the Cougars.
Anyway, I'm off to have a shower and rid my myself of the Pulp Mill stink that pollutes Prince George.
Tomorrow we talk Canucks, dammit!