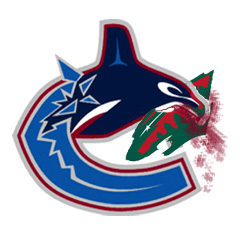 First of all, center Nathan Smith has been called up from Manitoba today. Does that mean that the ever-so-crappy Tommi Santala is out? I bet Smith could hit an open net, couldn't he?
How important is this game? The Canucks (41-23-5) have to beat the Wild (39-24-7) tonight, otherwise the Wild will draw even with them for 1st spot in the Northwest Division. In the Canucks' favor, they do have a game in hand. But forget about that. Vancouver needs to rebound from their 4-2 loss to the Ducks on Sunday, a game where they failed to show up out of the gate and were more or less buried because of it. At least they showed resolve in that one and comraderie as the game went on.
These 2 teams have played eachother 6 times this season, with the Wild winning 4 of those games. Vancouver won the last meeting in a shootout, and Jeff Cowan had 2 goals. The Canucks couldn't hold on to the 3-2 lead in that one, as Kim Jonsson tied it on the powerplay. The shootout went 6 rounds until Dan Sedin turned Backstrom inside out with a great deke.
Will the Canucks equal the Wilds' speed and intensity tonight?
Can the Canucks play a strong 60 minutes at home?
Can they contain that damned Gaborik/Demitra combo? How about Branko Radivojevic, who has 5 goals against the Nucks this year?!
Are the bra's coming out in full swing? Is Cowan officialy done scoring for a while?

An interesting and disturbing sidenote is that the Wild get to play the Oilers 3 more times in their last 11 games after tonight (we play them once). Why does that matter? Because the Oilers are looking more like Coilers than Spoilers. That may not change, as the Oils are in a massive losing skid.
We HAVE TO win tonight, and I say we will: 3-2 in OT. Luongo is going to have to be Luongod tonight. Any other guessers out there?