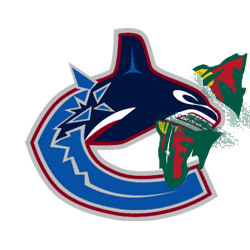 Season series: The Wild have won 4 and lost 2 to the Canucks this season. The last game that they played on February 14, Sami Salo was the overtime hero. That was also when the Canucks were red hot. But that has changed. The Canucks are not playing a full 60 minutes lately. They are lacking intensity and speed. That type of effort is not going to fly against the Wild. In fact, the Wild are going to beat these Nucks if Vancouver don't step it up and play at a higher level.
This isn't Phoenix. Minnesota has no problem skating hard and being aggressive at a consistent level. I don't know what is going to motivate the Canucks tonight. Maybe Jeff Cowan should play on a scoring line. He has no problem showing intensity, and was a difference-maker last game against the Coyotes.
My take:
All that being said, the Wild are a division rival. The Canucks play better against division rivals, don't they? I think this one will be close, but the Wild will take it by a score of 2-1. Hope I'm wrong again! If the Wild win, they will take over 1st spot in the Northwest Division.

Will Manny Fernandez play? He has returned from his MCL injury, and hasn't seen action since January 20th. Niklas Backstrom is probably still out with a lower body injury. If not Fernandez, it will be 22 year-old Josh Harding, who posted a shutout in a 5-0 win over the Oilers last game, stopping 30 shots. Harding is no slouch. He was the WHL MVP in the 2002-03 season. He has 2 career shutouts in 5 NHL starts. Yeesh. Goalies grow on trees in Minnesota.