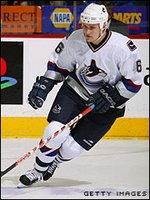 So much for a bitter contract dispute with Salo this summer. Dave Nonis has signed Salo to a 4-year deal today. Terms of the deal were not disclosed at this time.
I wonder kind of dollars Salo will make. He is currently making $1.5 million per season. I'll bet Nonis doubled that, perhaps at the most. Any other guesses out there? If that's the case, there will be some changes in the summer to absorb that money. (Like dumping Naslund perhaps?) His earnings probably escalate over the 4 years.
I am mostly concerned with Sami's ability to stay healthy. The last time he played anywhere near a full season was in the 2002/03 season (79 games).
But his presence at the point seems to be on the increase every year. There is no mistaking his booming slapshot. He plays over 21:00 per game, and has proven to be a clutch player with 6 game-winning goals this season.
The Nucks originally acquired Salo on September 21, 2002 in exchange for Peter Schaefer.