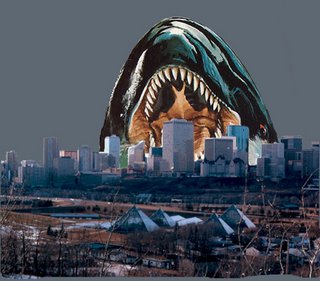 A guy named Hangers posted at the Canucks.com Forum that he is going to the Oilers game tonight. He was wondering if anyone could give him an idea of what to put on a sign. The Forum members were quick to give suggestions, including:

"Double D's aren't the only Cup Cowan's getting this year!"

"Who DOESN'T want to leave Edmonton? Even Gretzky didn't stick around, so stop crying"

"you can't spell oilers without loser"

If I could make up one, perhaps I'd say: "The only thing that's hot in Edmonton right now is Rachel Hunter!"

So, what about tonight's game? Should be an absolute ass-kicking, right? Well hold on for a second. Let's not assume anything. What we will need to see from the Canucks again tonight is a consistent effort against a lousy team in a game following an emotional victory over Detroit. I'm sure Vigneault is telling his boys not to take Edmonton lightly, but will the boys respond tonight?
Edmonton has basically lost 10 in a row since the departure of Ryan Smyth.
In that God-forsaken streak, they have given up 37 goals and scored a piddley 9 goals. The Oilers' last game was a 3-2 OT loss to the Blues. Sounds like an improvement, right? Well they were outshot 40-24. There is a Rolo-god.

The Canucks have won 4 and lost 2 against the Coils this season.

My call: A 4-2 win for the Canucks. Damn, can you imagine if we would lose tonight? We'd never hear the end of it! Any other Nostradamus' out there?