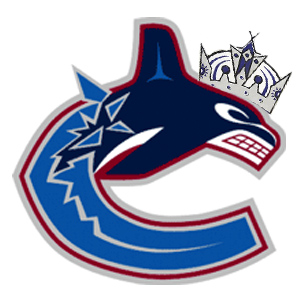 First of all, the Canucks have recalled Yannick Tremblay from Manitoba, I guess meaning that Sami Salo will not play tonight. Haven't seen Tremblay in a Nucks jersey for a while now. Maybe he can chip in offensively tonight.
The Canucks have won 5 of their last 6 games and continue to hold the NW division lead. They have outscored their opponents 14-4 in that span.
The Kings have lost 3 of their last 5, including losing their last 2 games against the Wild and Sharks. They were outscored 7-2 in those 2 losses. Oh good! A Los Angeles goal drought!
Kings coach Marc Crawford had this to say about the Canucks' great penalty killing:

"They're effective on the penalty kill because their goalie's probably the best in the league."

That's why you you signed Cloutier in the offseason hey Marc? I like the Canucks' effort as a team killing penalties. I wonder if Crawford watches the Canucks this year and wonders: "Why the hell couldn't I get them to play like that? The Vancouver team I coached had more talent!" It probably irks him to no end. But it also motivates him to ensure that the Kings play tough against his former team.
Expect that tonight.
The 2 teams have only played eachother twice this season. Each team has picked up a 3-2 victory. I'd say the score could be about the same tonight. My prediction is a 3-2 Canucks win. As usual, feel free to make a prediction in the comments section. I'll start keeping track of who's right from now on and post about it in the near future. But you have to pick the right score and the right team! Alright? Good luck!
Enjoy the game!

Time to cheer for the Flames. They play the Wild again tonight.

***Update***
The Flamers are beating the Wild 2-0 halfway through the 1st period already! haha!