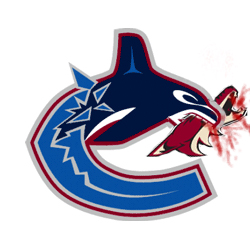 The Canucks begin a 3 game mini-road trip tonight in Phoenix, against a Coyotes team that has lost 3 in a row. This should be a walk in the park right? After killing the Lightning a couple nights ago, we should destroy the Dogs tonight, right?
Absolutely not! The Canucks trend this season is to lose their aggressiveness after winning a huge game and/or not playing a full 60 minutes against non-playoff teams.
Their record against cellar dwellers is is less than stellar, Keller. Excluding Edmonton, who the Canucks have had their way with this season, the Nucks have 14 wins and 9 losses against current non playoff teams. Out of those 23 games, 16 of them were 1-goal games.
I don't know if the Canucks think that these lower teams are going to be a breeze, or if they don't prepare themselves mentally before these games.
It took a 3rd period comeback for the Canucks to defeat the Coyotes on March 1. Phoenix youngster Bill Thomas made his presence felt that night.
On a more positive note, that was the start of Jeff Cowan's streak. 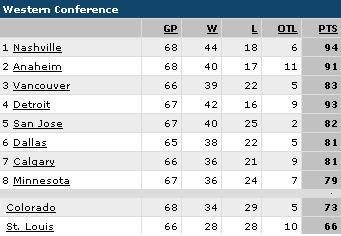 Tonight we will get to see Dany Sabourin get the start. Oh yes. And we will analyse his every move, and mention how small he looks in net, and curse him for any lousy goals he lets in. But at least Sabourin is improving, and I'm sure I can speak for most Canuck fans when I say that we have more confidence in his ability now. Especially after he stopped 38 of 40 shots in a win over Anaheim on February 20th.
I am hoping that the Canucks perform well in front of him tonight. That would mean playing a full 60 minutes against a desolate team, matching their speed, staying out of the penalty box a little more, and getting a victory in this must-win situation. The 2-point lead we have on the Flamers could turn into 4 tonight if we beat the Dogs and Calgary loses to Nashville... Go Preds!

My prediction: 4-3 Canucks. Cowan gets the 'trick' and a female Coyotes fan hops off the Phoenix bandwagon, and throws her bra on the ice.

Haha, I don't think Sportsnet reads the news very much.