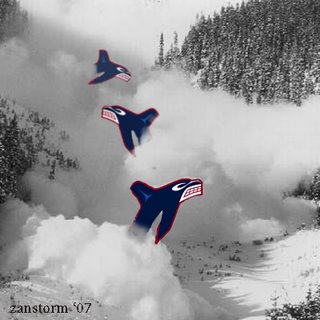 "For me those two games against Colorado, with the way the schedule seems to be right now, those are probably going to be the two games that will assure us of a playoff spot, or mean that we'll have to keep battling for that official playoff position," Canucks coach Alain Vigneault said on the team's official Web site.

The Canucks have won their last two matchups with the Avalanche after being held to just five goals in three losses, all in Denver. Vancouver, which has won its last four home meetings with Colorado, needs one win to match the single-season franchise record set in 1992-93.

The Avalanche have only lost TWICE since February 27th, an OT loss to the Wild and a shootout loss to the Oilers last game. 9 wins in that span. Should we be concerned? A little. 5 of those wins came against non-playoff teams: Columbus, Chicago, Boston, Phoenix and Edmonton.
The Canucks have won 9 and lost 3 since February 27th. 4 of those wins have come against non-playoff teams. Our last win, a 2-0 shutout of Nashville was no small feat.

How well will the Canucks play after 4 nights off? How long will it take to get their legs going? Hopefully they can hold Colorado off the scoresheet until that happens.
The Avalanche are fighting for their playoff lives and are currently 5 points behind 8th-place Calgary. They are going to be a real pain in the ass. The best thing we can do is beat them tonight and Tuesday night, hope for Calgary wins, and then destroy them in their non-playoff misery on April 5th, because we are going to need all the points we can get to hold off those pesky Wild.
One thing is for sure: beating the desperate Avalanche would show alot about the Canucks' resolve and character.
Colorado's playoff chances will probably be determined in these back-to-back games against the Canucks.

My call:
3-2 Canucks. After Tuesday night, the Avs will be thinking about which club to use on the first hole when the regular season ends.