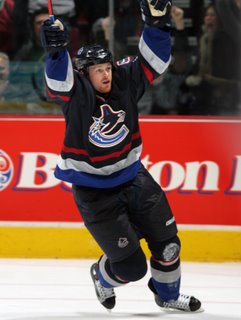 The Canucks just won a game in near perfect fashion. They outshot the Lightning 28-17, out-hustled them, and out-chanced them. The Lightning had chances, but shot the puck wide more times than I can count. The Nucks on the other hand capitalized on their chances and got a couple of terrific breaks. Breaks that include Bryan Smolinski scoring a flukey one shorthanded on Lightning goalie Johan Holmqvist in the 3rd period.
But let's focus on the one Canuck who deserves absolute praise: Jeff Cowan. He had 2 more goals tonight, his 4th and 5th goals in his last 3 games. The Holy Cowan is so admirable that he recieved chants from the GM Place crowd, and a bra was thrown onto the ice after his second goal with less than a minute left to play. Yeah, Cowan is becoming a cult figure in Vancouver after his recent hot streak, and I am loving it. It nearly brought a tear to my eye.
At least the Canucks took one less penalty than Tampa did, and Tampa, for the most part, couldn't capitalize on the man advantage. Only Lecavalier scored on the PP for the Lightning tonight. Other than that, Tampa missed the net on their chances, and the Nucks effectively killed those penalties.
Generally, this one wasn't even close.

PS: I absolutely encourage more of the bra-throwing whenever Cowan scores. I don't think I have ever seen that happen before in NHL history. Hats off to whoever did that. Love how the ref used a stick to spoon the under garment off the ice! haha
God, this is beautiful how the Canuck fans are rallying around this team. 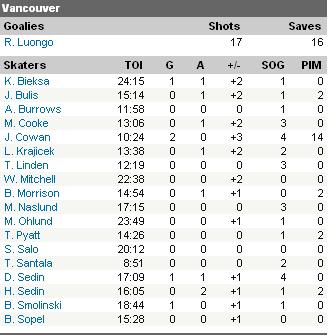