Share All sharing options for: Canucks 4 Wild 3 (SO): Holy Cowan! 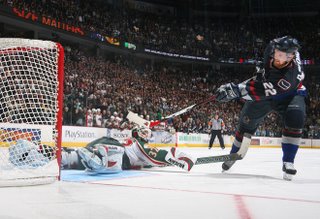 In a game that meant so much, the Canucks persevered and won a close one in the shootout over the Wild. A shootout that went 6 rounds. Thank Gad for Daniel Sedin's deking wizardry! (pictured)
The Canucks came back from one-goal deficits twice. When they went up 3-2 after Jeff Cowan's second goal of the night, they were shutting down the Wild 5-on-5. But when it came down to killing Bieksa's interference penalty in the 3rd, the Nucks looked lost and outmatched by Minnesota's passing speed. Kim Jonsson tied the affair with only 5.5 minutes left in regulation on the PP.
- The Canucks showed the intensity that we have been waiting for over the past few games. They outshot the Wild 27-17 after 2 periods and looked to close this one out in regulation. They fell just short of that.
- Jeff Cowan got more icetime tonight (14:49) after his great performance against the Coyotes a few games ago. He scored twice and was a dominant force out there tonight, playing with Morrison and Cooke. Forget Luongo: Cowan is the new god in town. The Cowgod! Love it!
- The Sedins, for the most part, looked half-assed. I was hoping that Cowan would get more icetime than them in OT to get a hatrick and a game-winner.
- Luongod was not godly. Apparently he was battling a flu. He looked shaky in regulation, but more than made up for it in the shootout.
- Boogaard is a sack of shit. Good thing he only played 5:52. He's a beast, but I hate him.
- Gaborik and Demitra are absolutely deadly. The Wild are set to make some serious noise in this Conference. Just not against the Canucks!
- The Bulis-Naslund-Smolinski line is showing promise.
- Tommi Santala is NOT showing promise.
- If shooting from the point and defecting the puck past the opposing goalie works, then I'm in. That seemed to be the theme of the Canucks tonight. Since when did Cowan have such great hand-eye coordination? He had 2 goals that looked identical.

1. Jeff Cowan. He can tangle, he can score. Who else? Jeff Freaking Cowan??!!
2. Willie Mitchell. 2 assists. Solid, baby, solid!
3. Demitra or Gaborik. Not sure. Gaborik had 1 goal and 6 shots. Demitra had 2 assists and 5 shots. Take your pick. You'll forget by tomorrow anyway!

"It's good he went high to the glove side because that's one of my better points, Luongo said (referring to Bouchard's back hand attempt.) "It's huge because they were right behind us and breathing down our necks. We gave them a point but we're able to get two on our side so we'll take those and we're pretty happy with that."

"Just get to the net and create some havoc and try to get body position," said Cowan, whose 14:49 of ice time was double his average. "When you're out there consistently you get in the game a little more. It's hard when you're only playing five minutes a night, it's hard to get into that."

Well, Jeff, if you keep playing like this, you'll have no worries! 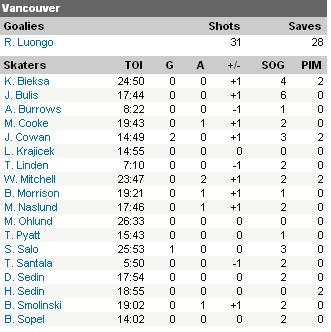