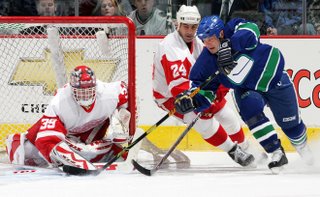 Now THAT is the Canucks effort that has been lacking recently! The Canucks buried the Wings early and held on to their lead by weathering a 3rd period storm and even got an empty net goal from Trevor Linden to seal the deal.
The Canucks looked alot less chaotic in their own zone last night, especially in the 3rd period when Detroit came on and outshot them 14-6. When the Wings had a great chance to score, they were either stymied by Roberto Luongo, or just did not get the bounces, like the open net chance that went off Mattias Ohlund's skate.
-there were too many penalties in this one. The Canucks went 0-for-9 (not good) and the Wings were 1-for-8. Our PK was pretty damned good, with even Brendan Morrison scoring a shorthanded tally...that was a great goal.
-Cowan continued his strong play but his icetime suffered because of all the special teams involved.
-Bryan Smolinski's wrap around goal was priceless. Smo finally got rewarded for his great play of late.
-Niklas Lidstrom made some errors tonight, and was a -4!
-Jan Bulis was strong again tonight. He skated hard all night, and checked very well.
-I thought Lukas Krajicek was the first star. He scored a great goal over Hasek, was a +4, played over 21:00 in Willie Mitchell's absence, and blocked a lot of shots. Great effort by him.
-The Canucks always seem to show up against Detroit, don't they? But let's be a little realistic here. I think Detroit got up on the wrong side of the bed yesterday morning. They looked flat and lifeless at times. That is not the dominant Detroit that we've seen this year. They were moving the puck around really well, but did not seem to have an extra gear, except Pavel Datsyuk, who was terrific. Perhaps this can be attributed to their back-to-back emotional wins over Nashville a few days prior.
-Damned Flames! They couldn't beat the Wild at home! Thanks for nothing, jackasses!
-Wait a minute, the Avalanche are only 6 points out of 8th spot now. Is there even a remote possibility that these guys could squeak in?

Beside the Point
Winnipeg Free Press- Bertuzzi's on his third team in the last six months, and it sounds like he might call it a day if the Red Wings don't re-sign him:

"But I’ve been fortunate. It’s my 13th year, I’ve been around for a bit and I’m going to give ‘er a go here and then start getting more involved in my family’s life. This is an opportunity I didn’t want to pass up and I want to take full advantage of it and decide my future after that."

What the fuck ever... 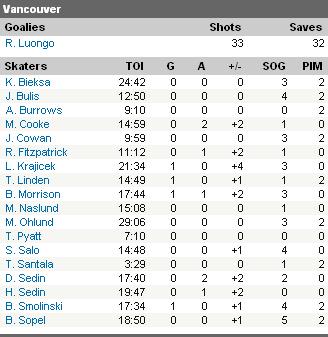