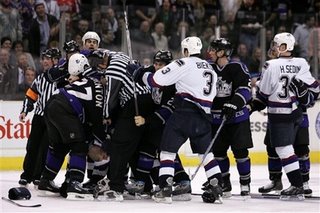 Well that was a fairly entertaining game. The Canucks got some help from Luongo tonight, as they looked a bit uninterested, and beat the high-speed Kings 4-2. The Dank, Hank and Tank Connection (thanks Beaner!) combined for 8 points. Pyatt's goal was especially sweet, for one because of his great backhander, but also because all 3 Canucks that were in on that play used the backhand. Don't see that very often.
But the play of the night had to go to Jan Bulis. New guy Jack Johnson was going to dipsy-doodle around Bulis along the boards at center ice and Bulis stuck his Bulisian ass out and crunched the kid with a massive hip check. Isn't it usually Bulis that recieves hits like that? Bulis was skating super again tonight, but couldn't capitalize on the scoresheet. Too bad.
Kudos to Jack Johnson. He looks like he's going to be a beauty. The best King by far was Dustin Brown, who showed that he not only has a sweet pair of hands, but he can also dish out a marvelous check.
-What did Cowan do to deserve to be benched in the 3rd?
-What did Santala do to deserve the promotion? Miss the net by 5 feet over and over again?
-Markus Naslund is a floater. And let me tell ya right now: Canucks fans will not be pleased with him in the post season.
-Why Burrows was benched was a no-brainer. Not a good game by him.
-Yannick Tremblay was not much better. He looked mindless out there, and got caught up ice too much.
-Good to see Smolinski bag one.
-Good to see Calgary beat up on Minnesota. Now we are up on the Wild by 3 points with a game in hand. Hooaaa! 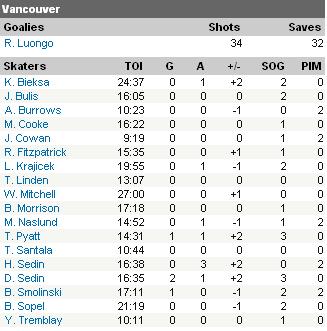