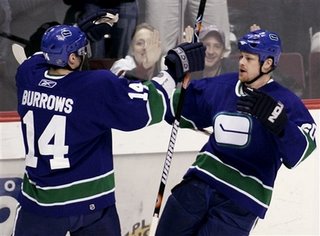 From the point that Bieksa coughed the puck up to Steve Reinprecht, who passed to Shane Doan for the one-timer 3-2 goal, I had a sinking feeling that the Canucks were going to lose another one. But Dan Sedin scored a PP goal less than 3 minutes later to square it up. The Doan goal was a minor glitch, as the Canucks decided to turn it on and apply consistent pressure in the 3rd period. In that frame, they really buried the Coyotes showing the intensity that has been lacking by them recently.
The intensity level, in my opinion was created and led by Jeff Cowan, who was rewarded for his superb efforts by playing nearly 7 minutes in the 3rd period. Cowan had scored a beauty shorthanded goal on the breakaway in the second that really saved the Canucks' carcass, as Bill (who?) Thomas scored just after that to tie the game up, rather than put the Coyotes ahead.
How about Jan Bulis? How did he play tonight? It can be best described as "moments of sheer stupidity followed by great effort." Enough said. The jury is out on that fucker.
Markus Naslund scored the winner after a flutter back hand pass from Sopel. Ah! A great finish.
Let's be honest here. The Canucks played a tremendous 3rd period outshooting the Coyotes 11-7, but they really could have lost this one because they still lacked intensity (and were out-hustled by Phoenix) in the first 2 periods.
At what point is this team going to play a consistent 60-minute game?
My 3 stars: 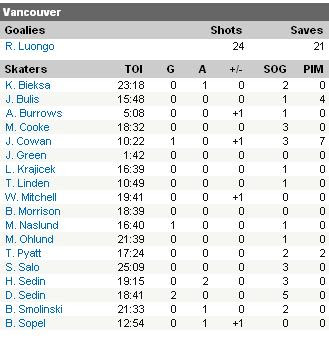