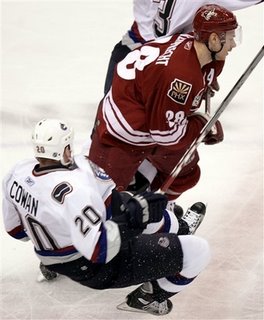 The Canucks came out and did exactly what they needed to tonight. They beat a non-playoff team handily, they played a good 60-minute game, and they took a few less penalties. The pressure they put on Phoenix in the 1st period and going up 3-0 was too much for them to handle.

QUICK NOTES
-Cowan the Bra-barian scored another goal tonight, extending his streak. But he took a mighty wallop from who I thought was Nick Boynton, but the picture shows it was Steve Reinprecht perhaps. Either way, it was a big hit, and I wonder if that will cool Cowan down now. A massive hit has a way of doing that. Cowan was pretty quiet after that.
-Why didn't Pyatt take his penalty shot? Does he have any confidence in his own ability? Nice save by Cujo on Hank though, as Hank took Pyatt's shot.
-Dany Sabourin looked pretty good tonight. He didn't have much of a chance on either goal he let in. A big plus to the Nucks' team defence tonight. They played great in front of Sabu.
-The Sedin-Pyatt line looks limp and out-of-sync. I can single out Pyatt as looking very weak out there.
-The Naslund-Bulis-Smolinski line looks better all the time. Naslund's goal was sweetness, taking a crafty pass from Smolinski. Bulis plays with a lot of hustle, and that is probably why he is still in a Canucks jersey.

With this win, and a beautiful loss by the Flames to the Predators tonight, the Canucks have widened the gap between themselves and Calgary and Minnesota to 4 points. But Vigneault is not smug about it:

"I still think this is going to go to the wire," Canucks coach Alain Vigneault said. "There are so many conference games and division games left."

Now let's see what the Canucks have against the Sharks and Ducks...