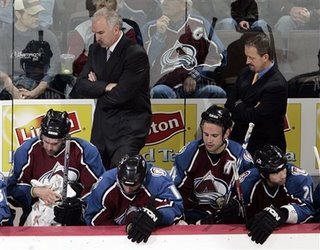 I didn't get to watch a lot of this game as we were at the Cougars game. We watched the Nucks in between plays on a TV in the suite we were in. (Yeah, it pays to have connections!)
It appears Alain Vigneault gets results when he's pissed off! The Canucks clinched a playoff spot and at the same time really ruined Colorado's chances for making the postseason. How things have changed! Now we spoil their chances!
Anyone want to comment on the game? Tell me what I missed? I see Vancouver took a lot of penalties.
As for the Cougars/Blazers game: it was awesome! The Cats erased a 3-2 deficit late in the 3rd and won it, taking a 3-0 series lead. I'll talk more about that tomorrow and post some pics.