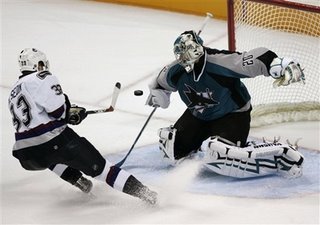 Wow. What a game despite the fact that it was a low-scoring affair. I'll keep this in quick point form.
-Cowan the Brabarian had 3 shots and no goals, so my prediction was close. But he showed alot of hustle still and could score again soon. Anyone else see the fan in the shark tank who had a bra tied around his head? Take note, Vancouver.
-The Sedin-Pyatt line came alive as the game went on. We were cursing Pyatt for looking like a slug with 'cement hands' (as Hodge would say), earlier in the game. But then they turned it on, providing the offence that got the job done. Pyatt's goal was a beauty to the top shelf. It had Temujin exclaiming: "Pyatt Riot!!" Good times.
-The Nazzy-Bulis-Smolinski line continues to improve, and I think we got something good coming here. Smolinski appears to gel the other 2 together.
-The Canucks played with discipline! Only 4 penalties against to San Jose's 2. The Sharks tied it up on the PP on a goal from Marleau half way through the 3rd, but they never lost their composure that often. When they did, Luongo was there again.
-Shots on goal: Canucks 37 Sharks 26. A complete reversal of the 2 previous games they played eachother. Evgeni Nabokov was absolutely terrific tonight. I almost felt bad for him, but they did get a point out of the deal.
-My 3 stars:
1. Nabokov
2. Hank Sedin. Winning goal in OT
3. Fill in the blank. Luongo? Cooke? Pyatt? Smolinski? Towel Boy?

What a great team effort. This team is not stopping for anything. They are playing Vigneault's system religiously. I swear, it's like Jonesville sometimes. OK, not quite. 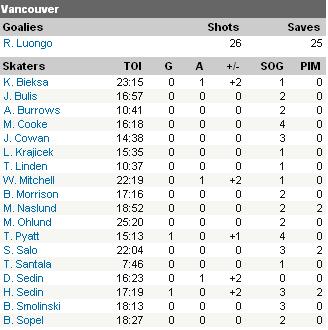