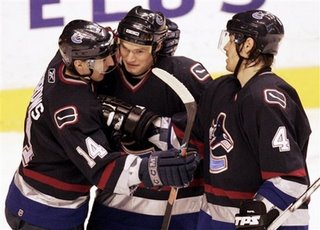 Wow. That was total obliteration! The potentially explosive Predators' offence was held off the scoreboard tonight in a 2-0 Canucks win.
I am loving how well the Canucks team played defensively tonight. Luongo did not have to be great at all. I am also loving how Jan Bulis and Tommi Santala were the Canucks' scorers. Off all the damned people! The net must have looked like it was 10-feet wide!
There really is not much to say here. It was so one-sided. The Canucks skated hard, forcing the Preds to take 8 penalties. Vancouver played more responsibly and only took 5. No goals on the PP tonight, but plenty of chances.
In the defence of Jan Bulis...I have been hard on that guy this year, but once again he was one of the best players. His penalty killing was just great.

1. Roberto Luongo. He got the shutout. But I am conflicted giving him the first star because he did not have to be Luongod at all.
2. Jan Bulis. 1 goal, the winning goal, and a gritty effective game.
3. Matt Cooke. C'mon, you KNOW it! Cooke was a fucking monster out there, not Morrison, like TSN mentioned.

Good times! The Canucks whooped the asses of the Western Conference points leader, and showed us that they are for real this year. They also showed us that this team is not the same team that lost 6-0 to Nashville last November. They have matured greatly since then and are playing like a dominant cohesive unit. 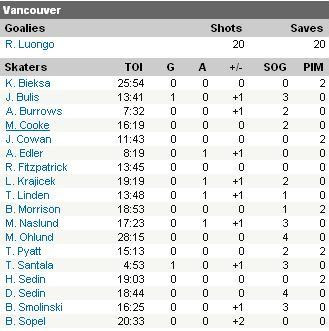