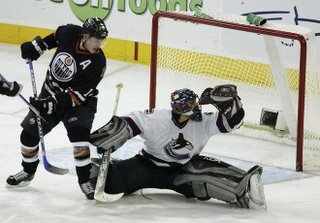 "We knew they were going to be working hard and we had our hands full getting the two points," Daniel Sedin said after the game. "I don't think you could say they have been outplayed the last 10 games. It was a tough game and we deserved the two points. We had a game in hand on Minnesota, so it was key to get the win tonight."

The Canucks fired 38 shots at Dwayne Roloson, and really progressed as the game went along. The Oilers had 37 shots on Luongo, and took it to the Canucks in the early going. Luongo was just a little bit better than Roloson.
The Sedins had 4 points altogether and are playing alot better of late.
Trevor Linden played very well. He scored a typical Linden PP goal and played over 16:00.
Notice Jeff Cowan's icetime below.
Notice Bryan Smolinski's icetime below.

Even if you are a Canucks fan and you hate the Oilers, it's time to start cheering for them. Especially in their last 3 games of the season, where they play the Wild back-to-back, and finish this season off against Calgary. Hopefully the Oilers can get on a roll and do us some favors. 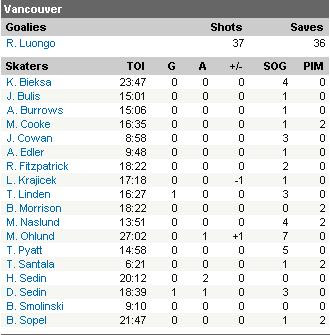