Cam Ward will miss time due to injury

Share All sharing options for: Cam Ward will miss time due to injury 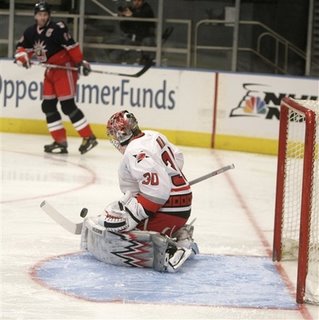 Thanks to Temujin who pointed this out to me yesterday. We thought he was crazy for saying that Cam Ward may miss the rest of the season with a laceration above his left knee, caused by an errant skate in the 2-1 shootout loss to the Rangers on Sunday. But Jin has pointed out that D-Lee at Red and Black Hockey has a post up about it. Wow. This does not bode well for the Hurricanes' playoff hopes, even though they are saying that they are 100% confident in John Grahame, who will be the new #1 guy for now. The Canes are currently in 9th spot in the East.
But let's not put a timetable on it on Ward.
The News and Observer stated:

Ward remained in the game until he could cover the puck and get a whistle. He then skated straight to the Carolina bench and walked to the dressing room. He said it took eight stitches to hold the muscle together and three more to close the wound.
"It actually didn't feel like that much, feel that serious, then I took a look at my knee and you could see something was wrong," Ward said. "The Rangers came in the zone a couple more times, and I froze the puck. Once I looked, you could see the muscle."


There is obviously an issue now with how long the wound heals. Any save in the butterfly position will stretch the skin and open the stitching. So, Ward is going to need some time, and is out indefinitely. This News and Observer story says he could miss a minimum of 3 games only. But GM Jim Rutherford said:

"Cam will take his time to heal."