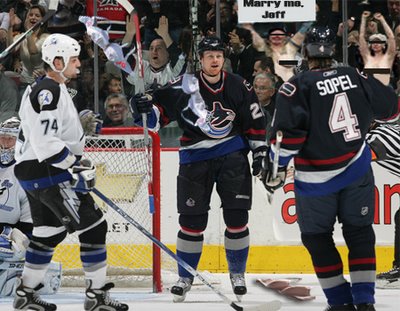 The script of Jeff Cowan's NHL story almost couldn't get any better than this. Cowan now has 5 goals (5 points) in his last 3 games, after going 52 games without. That is 38% of the Canucks' goals in those 3 games. Cowan attributes his offensive numbers to his increased ice time, yet his increased ice time is a reward from Vigneault for his strong play and offensive numbers. At the same time, Cowan was only on the ice for 10:24 last night, and still scored 2 goals.
Suddenly, Vancouver fans are giving Cowan hero status for his superb play. The fans were chanting his name last night, giving him thunderous applause, and one fan threw her bra onto the ice after Cowan's second goal, which the referee removed from the ice with a stick. Comical! Isabella at Stick in Rink was at the game, and said this about the incident:

I'm not hallucinating, and there really is a bra on the ice. See Mitchell and (I think) Henrik Sedin skate around it, wondering what to do. They look at each other. Henrik skates away. Mitchell pauses then takes his stick and lifts the bra to the cheers of GM Place. He gingerly skates over to the ref and hands him the bra. For a minute, they look like they want to either giggle or cry.

Nicknames for Cowan are being tossed around on the internet like:
-Cowman
-Milkman
-Big Red
-Double D
-JC Superstar
-the best one: Cowan the Bra-barian!

These are good times. The Canucks fans are seeing great hockey, and Alain Vigneault has a terrific line now in Morrison, Cooke, and Cowan. Now, how long will Cowan's streak last? How long will bra power last for that matter?
The 30-year-old, who was born in Scarborough, Ontario, is not on his way to winning a Rocket Richard trophy. Cowan's best season was in 2003-04 with the Atlanta Thrashers, where he scored 9 goals and 15 assists in 58 games. He has 45 goals and 30 assists in 351 career NHL games.
As long as Cowan plays this hard, he will play more than 10 minutes per game (barring fighting majors), and Trevor Linden will play on the 4th line. Here's hoping Cowan-mania runs wild for a lengthy period of time.
As much as Cowan deserves praise, so do his linemates. Brendan Morrison did all of the dirty work on Cowan's first goal, driving around the net and passing it onto the tape. Jan "#99" Bulis made Sarich look silly, deking around him and making a no-look pass to Cowan, like Gretzky used to do. A beauty. Bulis and Gretz in the same sentence....wow. I am losing my mind. The Bulis love/hate relationship continues.... 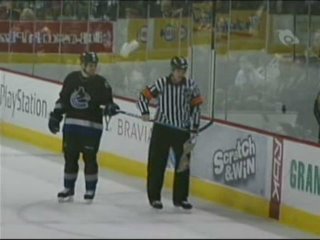