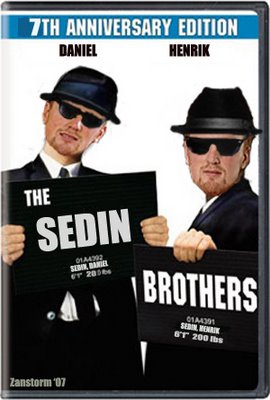 Sorry, I didn't recap last night's game. Myself and Captain Morgan had a great time after the game...too great of a time.
I can't believe how one-sided it was through 2 periods. The Canucks had outshot the Blues 23-7 at that point and were up 2-0. But their inability to hold on to leads recently caught up with them again in the 3rd period. Concerning? A bit. I am not sure why they are going into panic mode in the 3rd period lately when the other team presses. Is it a bit of a confidence issue?
Bottom line is that they got the job done in OT and gave a point to non-playoff team. Big deal. The Canucks are 6-2-2 in their last 10 games, and still have top spot in the Northwest by one point, and no, the Oilers could not be spoilers last night against Minnesota. The Wild play the damned Coilers 2 more times to the Canucks' one.
Jeff Cowan's promotion to the Sedin line was a complete bonus in every way. Cowan lit a fire under their asses, didn't he? The Brabarian didn't get any points, but the Sedins each had 1 goal and 1 assist. The 3 of them combined for 12 shots.
Trevor Linden got his legs going again. He recieved a promotion as well, and scored a beauty breakaway goal. His ice time jumped to 16:05.
I noticed Taylor Pyatt's effort increased after he was demoted to the 4th line. Vigneault really has a great way of motivating.