Avalanche 5 Canucks 4 (SO): Who's more desperate?

Share All sharing options for: Avalanche 5 Canucks 4 (SO): Who's more desperate? 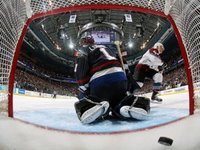 It was the Avs who played like they HAD to win last night. Hats off to them for not quitting and pouring their hearts out onto the ice.
The Canucks came out strong in the first period, outshooting the Avs 13-8 and outscoring them 3-2. But the Avs woke up in the second and took over the game. From the 2nd period on, the Avs:
-outshot the Canucks 22-7.
-took 1 penalty to the Canucks' 5.
-skated harder than the Canucks.
-erased a 2-goal deficit after it looked like the Canucks could win, seeing that Vancouver only had 2 shots in the 2nd and actually scored on one of them (Pyatt's 2nd of the night).

The Canucks came alive in the OT but couldn't beat Jose Theodore, who replaced Peter Budaj. Theo was hardly tested until the shootout, where he stopped every shot he faced. A smart move to pull Budaj by coach Joel Quenneville. The Avs responded.

The 8 points by the Sedin-Pyatt line now means almost nothing. Hank Sedin passing Andre Boudrais' assist record, as impressive as that was (the Henrik chants as well) has been soured in a sense. But hats of to Hank! He did it in style!

But a blown game.
A not-so allstar-like performance from Luongo. His 5-hole was too big. You could have shot a....beachball...through there.
An atrocious game by Lukas Krajicek.
The Naslund-Smolinski-Bulis line was fucking invisible.
Wouldn't you love to trade Naslund for Sakic right about now? Sakic puts Nazzy to shame.
And a really pissed-off coach:

"I'm hoping they're as disappointed or embarrassed as I am about this performance tonight," Vigneault said.

Viggy was not all that willing to talk to the media post-game. He looked like he was ready to kill someone. Probably Krajicek or Bieksa, who he singled out for miscommunicating on the Avs' breakaway goal by Brett McLean, who had just come out of the penalty box. That goal made it 4-3 and really kept the Avs' momentum going strong.

1. Joe Sakic. 2 goals, took the team by the balls and led them to victory.
2. Brett McLean. 2 goals and the winning shootout goal.
3. Taylor Pyatt. 2 goals.

The Positive:
- We will take the point, yes. And hopefully obliterate the Avs in their own building on Tuesday night. You know they will play alot better after Vigneault wrings their damned necks!
-The Nucks will clinch a playoff spot soon.
-We still have a game in hand on the Wild, and took over #1 in the NW again because of it.
-Would it really matter if Vancouver didn't clinch the #1 spot in the NW? I think not. It's just been so nice being on top for so long that you hate to see them give it up.

-By the way, if Cooke, Cowan and Morrison play on the same line, could we call them the CO-CO-MO line, and then have that damned Beach Boys song stuck in out head as we visualize Tom Cruise bartending? I came up with the name, but Temujin and Beaner started the brainstorming last night! 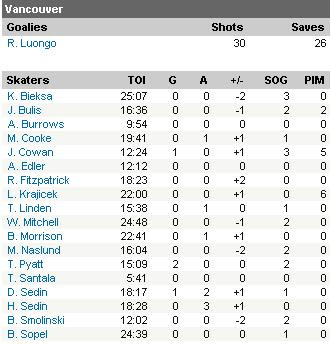