Share All sharing options for: Altanta needs a #1 center? 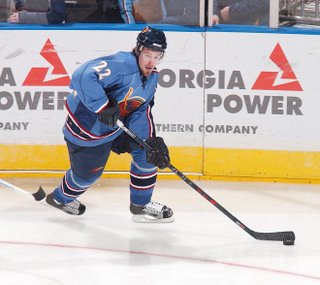 All season long I have kept griping about the Atlanta Thrashers not acquiring a decent number 1 center since Marc Savard departed last summer for Boston. On February 10th I laughed mockingly at the Thrashers for acquiring Eric Belanger from the Predators in exchange for Vitali Vishnevski. But I was wrong. Belanger struggled through his first 4 games with Atlanta, scoring only 1 goal. Since that 4-game drought, the 29-year-old has 3 goals and 4 assists in his past 5 games. Playing with Marian Hossa will do that to you, won't it?
If Belanger keeps this up, he will surpass the totals of his career year in Los Angeles of 16 goals and 19 assists in 62 games with the Kings. He currently has 11 goals and 15 assists in 63 games this season. Imagine what he could do if he played a whole season with Hossa. He may be a nice sleeper pick for the pool next year!