You betta bring it. Oh it’s already been broughten!

Share All sharing options for: You betta bring it. Oh it’s already been broughten! 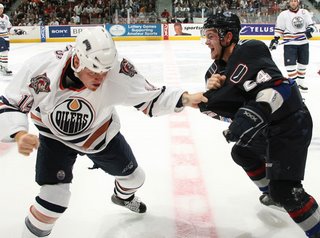 Vancouver should be angered at blowing a game against the Blue Jackets, the very same team that the ideally-tired Oilers just spanked last night. With three straight games against the stubborn Alberta teams, this is certainly no time to have confidence issues in how the Canucks have played the past few. Listening to 1040 during the day you’d think the Canucks were Los Angeles, the fair-weatherness is absurd. Last I checked we still have that long haired guy in net and Tomax and Xamot up front and clearly capable of leading this team. Time for guys like Pyatt and Bulis to step up and Mattias and Beeeska to clamp down in their end and this team will be fine.

Tonight’s Prediction: 4-2 Canucks. Cooke and Torres, respectively, punish anything that moves. Then they meet at center ice and Cooke removes more of Raffi's teeth. The teeth themselves get thrown in the stands and are on eBay this time tomorrow morning.