Share All sharing options for: Would Nonis trade Salo? 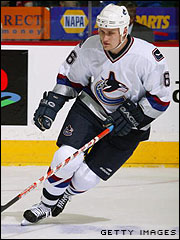 Seen this on Spector's and the Vancouver Sun:

Sure, Nonis's team could use a centre to replace injured Ryan Kesler, another winger who can score, and one more experienced defenceman, just in case. The Canucks could also use some players to restock themselves over the next four years, so the most sensible trade Nonis could make would be to auction off Sami Salo.

This isn't a call to send the Finn flying. But Salo, unless Nonis performs payroll acrobatics this summer or the defenceman likes Vancouver enough to stay -- again -- for less than market value, is leaving as an unrestricted free agent in July.


The article goes on to say that Salo would be worth 2 first round picks or a first round pick and a good prospect. Should Nonis move Salo at the deadline to get immediate help up front instead? Is Nonis willing to trade away good draft picks to acquire a rental player for the stretch run?

"We're paying for it now," Nonis admitted this week. "It's a huge cost. Every team that thought they had a chance to win would probably have made the decisions we made. We traded away two first-rounders [including the 2002 pick for Trevor Linden] and several seconds in order to try to win.

"But you look at a team like the one we played Sunday; San Jose is a great team. They have superstars, but they're a great team because they can afford the superstars by having good, young players all through their lineup that they drafted. Anaheim could afford to make the trade for Chris Pronger because they had pieces to deal. They could afford to trade Joffrey Lupul and Ladislav Smid [to Edmonton] because they already had Ryan Getzlaf and Corey Perry and Francois Beauchemin and Shane O'Brien.

"This is the only way to build. For the first time in a decade, we have eight or nine legitimate prospects and some draft picks. We need to restock so we can be good for a long time."


Calgary's acquisition of Craig Conroy was a wise move. Conroy will make the Flames that much better and that much harder to catch for top spot in the Northwest for the rest of the season. I think the Canucks should follow suit for 3 reasons:
1. The Canucks ARE a contender for the Cup this year and need one scoring winger to bolster a good lineup, like the article says. The cap structure is successfully making any team that makes the playoffs a contender. Just ask Edmonton.
2. My confidence in the Canucks' drafting of forwards is waning in the past few years, unless one of these guys proves me wrong.
3. Naslund is not going to produce any more than he is right now if he doesn't have a player on his line that gels with him. It appears that Vigneault has been looking all season for that on the current roster and hasn't found it. My patience for Naslund's inflated salary is wearing thin.

The rental player doesn't have to be Peter Forsberg. There must be cheaper players out there that will suffice that aren't going to bolt in the summer for a $3 million contract elsewhere. Maybe Nonis' best bet is to acquire one of those types of players and say, a 2nd round pick.
Then again, maybe the Canucks' best bet is that Naslund gets injured for the rest of the year so that Nonis his more flexibility at the deadline.