Share All sharing options for: Vishnevski now headed to Nashville 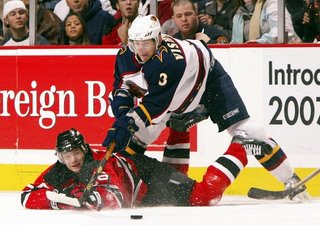 So that's why the Predators acquired Eric Belanger yesterday: to trade him to the center-deprived Atlanta Thrashers in exchange for rugged defenceman Vitali Vishnevski. Vish-dog, as Earl Sleek called him, is 26 years old, has 3 goals and 9 assists in 52 games this season, and will be a UFA at the end of the year.
The Preds boast a dominant blueline now, as Vishnevski joins Ryan Suter, Shea Weber, Kimmo Timmonen, Marek Zidlicky, and of coarse, Smithers' own Dan Hamhuis.
So Nashville is tinkering and improving their Cup-ready team...
But what about Atlanta? This does not address their lack of a top or second line center, unless you think Glen Metropolit, Bobby Holik, or Niko Kapanen are good enough. Steve Rucchin has recently fallen to injury and is hardly a candidate at this point of his career. The Thrashers are sitting at about $41 million in cap commitments
They have some room to trade for a bonafide #1 center, someone like: Peter Forsberg perhaps? Or is this team, who is in 3rd place in the East (because of playing in a weak division) content with the lineup they have?
The Thrashers also signed LW Denis Hamel off waivers from the Senators today. Hamel had 7 points in 43 games with Ottawa this season. He will bring a gritty presence on Atlanta's grinding line.