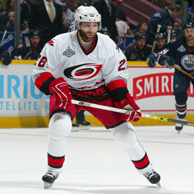 The Hurricanes are predominant in the news today.
Both Erik Cole (hip) and Scott Walker (arm) left last night's game against Boston with injuries that looked serious. However, according to the News and Observer:

X-rays found no major injuries for both Hurricanes. They are expected to travel with the team to Minnesota today and be re-evaluated by doctors there. On Tuesday, the team lost Cory Stillman, who will miss at least a week with a sprained right knee.


On top of that, the Hurricanes have traded Eric Belanger to Nashville in exchange for a familiar face today: Josef Vasicek. As TSN put it:

Vasicek, 26, netted 13 points in 38 games with the Predators this season and has been a healthy scratch recently. After being acquired from the Hurricanes by Nashville for forward Scott Walker on July 18, 2006, he returns to Carolina, where he played 316 NHL games from 2001-2006.


As for Eric Belanger:

Belanger, 29, has posted 20 points in 56 games this season for Carolina. The 6-foot, 195-pound Sherbrooke, Que. native ranks second on the Hurricanes in face-off winning percentage (53.4%). He was acquired by the 'Canes in a training-camp deal, along with Tim Gleason, from Los Angeles for Oleg Tverdovsky and Jack Johnson.


This deal looks like nothing more than a shakeup, more-so for Carolina. Vasicek played well for the Canes while he was there before. He'll take over the Canes' 3rd line center position I assume.
-----------
Another 'minor trade' today saw Wild Pascal Dupuis (wheee!!) acquired by the Rangers in exchange for Adam Hall. Dupuis had 10 goals and 3 assists in 48 games for the Wild this season. He is making $798,000 and is an RFA at the end of the season.
Adam Hall had 12 points in 49 games with the Rangers. He is making $975,000 this year, and will be an UFA at the end of the season as well.
I like the acquisition of Dupuis by Glen Sather. He is a quick and gritty role player who can chip in. The Rangers need all the help they can get.