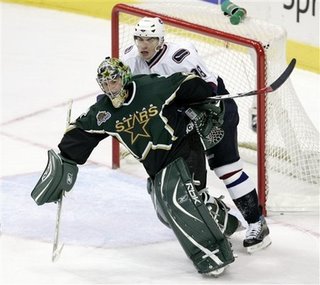 I'm not going to get too in depth about this game, as it was a let down and a downer. But I can sum it up quickly.
-The Stars skated harder and gave it their all, outshooting the Canucks 36-18, but Luongo nearly stole this one. Poor Luongo. It really could have been a 5-1 Stars win.
-The Canucks took 7 straight penalties from the 1st period until OT (explaining the reason why they were outshot so badly). They were doing a fine job of killing nearly every single penalty until, with 2:51 left in the 3rd, Jan Bulis decided to run into Turco for a goalie interference penalty, and a minute later Sami Salo cleared the puck over the glass from his own zone. The Stars tied the game with only 29 seconds left, and the Canucks scrambling to close this one out.
Fucking Bulis. His brain farted I think. I wouldn't mind if they traded him for a bag of barbecue chips right now. The Canucks lost all their composure after his boneheaded penalty, and Salo cleared the puck over the glass under pressure, so I won't fault him as much.
In OT, Lukas Krajicek took a tripping penalty. Jere Lehtinen bagged a PP goal as a result to end this one in frustrating fashion.
-Seeing it was a matinee game, it wasn't good to feel depressed so early in the day.
-Fucking Bulis. Even when Larshied, Shorty and Kirk McLean question your intelligence you KNOW you're about as smart as a chicken.
-The Stars played a disciplined game I must say. The Canucks didn't.
-Willie Mitchell played superb tonight in a losing cause.
-My 3 stars:
1. Jere Lehtinen
2. Willie "The Missing Link" Mitchell
3. Roberto Luongo 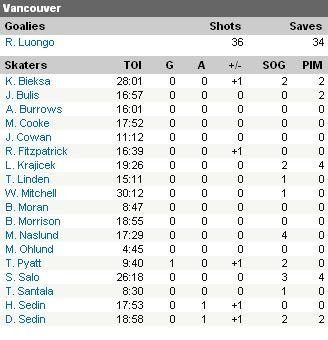