Shanahan taken off on a stretcher

Share All sharing options for: Shanahan taken off on a stretcher 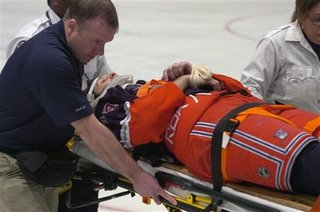 Oh boy. No one wants to see this happen. Brendan Shanahan collided with Flyers' Mike Knuble during the Rangers/Flyers tilt this afternoon. It doesn't look like they butted heads, but Shanahan was out cold regardless. No word on his condition yet. Moments earlier, Rangers' goalie Henrik Lundqvist took a Geoff Sanderson slapshot high, and left the game with an undisclosed injury.
These incidences are not good news to the Rangers, who are currently 3 points out of a playoff spot.
The Flyers did win the game 5-3 by the way. How about RJ Umberger? He's playing well recently. Is he going to emerge for Philly in Forsberg's absence? It appears that way.
-----UPDATE-----------
It appears that Mike Knuble got the worst of the deal. He has a broken orbital bone, while Shanahan feels like he drank a few too many Spiced Rum and Cokes!