Share All sharing options for: Sens 2 Hurricanes 0: In point form 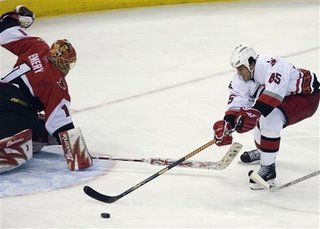 - It's amazing how loose Ottawa looks right now. On the offensive attack, they looked like they were playing pond hockey. It looked that easy for them. Their passes were crisp and their speed game was impressive. Ah, it's so easy to be loose when you're winning! The Sens have won 8 of their last 9.
-It was a different story for the Hurricanes. They looked out of sync and frustrated. Whenever they generated a decent scoring chance tonight, Ray Emery stoned them. The Canes are now 6-5-0 in their last 11, and are in danger of missing the playoffs. At the same time, the teams around them-the Leafs and Canadiens- don't appear to be in the mood to put together win streaks.

- Speaking of Ray Emery, it appears that the Sens no longer have problems in goal. Emery looks absolutely confident in the Sens' net as the starting goalie. In 43 games this season, Emery has a 25-13-2 record. He ranks 12th in the league in GAA (2.51), 5th overall in save percentage (.919) and 4th with shutouts (5). I'm sure these numbers would be much more impressive had the Sens not slumped so bad in October, losing 6 of 11 games.
- I'm just babbling here. Canes D-man Tim Gleason seemed to jam his elbow against the boards after chasing down the puck to negate an icing call. The Sens forward in pursuit made contact with Gleason which mostly caused him to crash awkwardly into the end boards. TSN's Lucky Pierre McGuire then went on a verbal tirade about how the no-touch icing rule needs to be implemented SOON. He mentioned that teams would not ice the puck more if the rule was brought in. I agree, because of the rule of no line change to teams that ice the puck. He also said that the rule applies in the World Juniors, and those games are not boring at all. This is where I'm torn.
Maybe I'm a traditionalist of sorts, but I'm not sure I'd like to see No Touch Icing brought in. I like the chase for the puck. I like physicality. Do I care that people get hurt on icing calls from time to time? Not really. I like physicality in hockey.
But there is a code of sorts that players have that there shouldn't be much (or any) contact along the boards when two players chase the puck on a 'delayed' icing call. So the lack of physicality in that aspect is already there. So why not implement the rule then?
I like the chase for the puck. But would I miss it all that much if No Touch Icing was in effect? Probably not.
Perhaps a better concept that would be for players to race for the puck to a certain point, or line. The call depends on which player crosses the line first. This could be the goal line, or a line made a little further back.