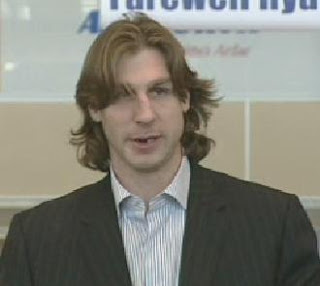 With respect to Messier's celebration last night, Ryan Smyth waited to give a press conference until today at the airport on his way out of Edmonton.
The footage of that in it's entirety can be found here. (search the list on the right side of the TSN A/V screen if this link doesn't take you right to it.

Pretty tragic stuff. To put some light in the situation, Smyth mentioned that he'd like to win a Cup with New York and then bring the Cup back to Edmonton.

Smyth and his agent were wanting to get the deal done earlier in the season.

In this Sportsnet news clip, I find it interesting how positive Shawn Horcoff sounds. He almost sounds like he's in management. But he is right.

The Islanders on the other hand, are very excited to have Smyth in their lineup.

"I mentioned to a couple of guys we got Ryan and, the smiles on their faces, they looked like kids back in junior hockey," Isles coach Ted Nolan said during a conference call.

Smyth will make his Islanders debut tomorrow night in New York against the Blues.