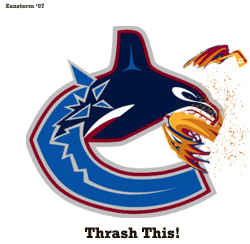 -The Canucks and Thrashers have not played eachother in nearly 3 years, (Feb. 13, 2004)
-Last time they played, the Thrashers won 4-1, and Slava Kozlov had 2 assists.
-The Thrashers beat up on Colorado 6-3 on Thursday, but had lost 4 of 5 previous to that game. Kozlov and Hossa had 2 goals and 2 assists each.
-The Canucks put out a putrid effort at home in a loss to Chicago on Wednesday. They usually rebound after such efforts.
-Both teams have 30 wins.
-Can the Canucks match the Thrashers' speed?
-Can they contain Hossa and Kozlov?
-Can they leave Kovalchuk in his slumber?
Tune in at 7 pm PST on CBC.
My call: 4-3 Canucks in OT.