The Leafs have recieved some great news today about injured Mike Peca. According to Sportsnet, Peca says he will be on skates withing 3 weeks, and that he'll be back in the lineup before the playoffs start. Peca has not played since December 22nd after attaining multiple breaks in his tibia after colliding with Chicago's Jim Vandermeer.
Peca gave two reasons as to why he will play again this season:

"...one, I'm going to be back before the end of the regular season and, two, we're going to be in the playoffs." 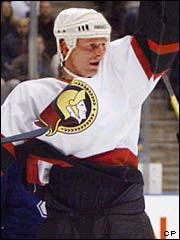 Gary Roberts has stated recently that he will waive his no-trade clause to play in Toronto or Ottawa. Gary, Gary, Gary, how the f--- can you even insinuate that you'd play for Ottawa, you traiterous b------! That is nearly the equivalent of Mats Sundin playing in Detroit!