Share All sharing options for: Oilers' playoff hopes in jeopardy 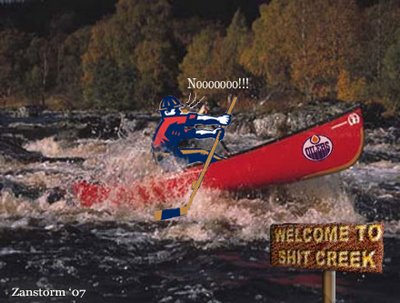 After watching the Leafs hold on to defeat the Oilers tonight in, as Taylor would say, Sundinian fashion, and seeing the Wild defeat the revamped Predators 4-1, and now the Flames defeat the Avalanche, the Oilers' chance for a playoff spot just got smaller.

''We made too many mistakes tonight,'' said Craig MacTavish. ''We had them making a fair number of mistakes, too, but we didn't capitalize.''

A large part of that was the play of Andrew Raycroft, who looked sharp tonight. But Mats Sundin, who is taking this Toronto bull by the horns lately, led the way with 2 goals. His second goal was a thing of beauty, charging in front of the net from the corner past Steve Staios, and using his reach to stuff the puck past Roloson. The Leaf fans in the ACC went ballistic!
Once again, the Leafs skated hard, played tight defensively for the most part, and were shooting the puck from all angles. It was a great effort.
The Oilers looked frustrated. They appear to be in somewhat of a funk. There is pressure on GM Kevin Lowe to make a trade to get this team back on the right track, but really, they need to find the answers as a team and get on a roll quick on this road trip before it's too late. It's not going to easy. They have 4 more road games left before returning home from their 7 game road trip. They have lost the first 3. Next week could determine their fate. They play Ottawa on Tuesday, Columbus on Thursday, Detroit on Friday, and finally Minnesota on Sunday. That's a rough week no doubt.
The Oilers have 23 games remaining. 13 of those games are on the road, where they are a miserable 10-16-3 this season, (the final 6 games of their season are all on the road.) 10 of their remaining games are against Northwest Division opponents. 8 of their remaining games are against opponents who have less points than they do or are lower in the standings. 5 of their remaining games are against Minnesota...whoa.

After tonight's games, here is where they stand in the West: 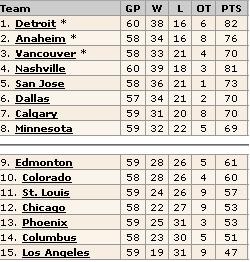 Not pretty. Oiler fans are banking on the teams above them to go into the tank...which doesn't seem likely right now. However, one thing is for sure: never count the Oilers out.
As a side note, I'm sure that all Oiler-hating Canucks fans can find it within themselves tonight to say two words to the Leafs tonight: Thank you.

Today, Kevin Lowe has rid the Oilers of a bit of baggage, sending D Marc-Andre Bergeron to the Islanders for Russian-League D-man Dennis Grebeshkov.

"We see the upside in the player we're acquiring," Oilers GM Kevin Lowe said. "We see this as a long-term upgrade."


Expect a deal for an immediate-impact defenceman soon by Lowe.
The Islanders feel they needed an offensive-type defenceman to improve their powerplay. Bergeron will give them that.

"This trade addresses our need for a quality offensive defenceman to improve our power play," said Islanders GM Garth Snow. "Marc-Andre is an excellent point man, a very good skater and a solid competitor."


Unfortunately, he will also provide more defensive blunders than someone like Janne Niinimaa.