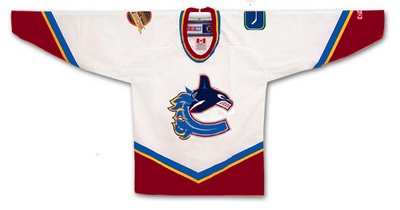 With the Canucks on the rise because of improved team defence, a world class goaltender between the pipes, and eliminating shitbags from the lineup, we could see a new Northwest Division champion this season. Last year, the Flames accomplished 103 points to win the NW Division race, 11 points ahead of 4th place Vancouver. This year could be different.
Now, since the Flames are potentially on the decline since their Finals appearance, and most Flames fans are closet Canuck-lovers, I figured I'd present a new 4th Flames jersey to the NHL. It will help the 'Canuck fans in hiding' in Calgary to take one step out of their closet, rather than overbear them with a current Canucks jersey. It's like meeting in the middle!
All kidding aside, this Photoshop work was created by me, but inspired by Ingmar, who is back with more blasphemous jerseys!
Ah, a slow NHL news day!
However, Anna Nicole Smith died today. Google images will never be the same...