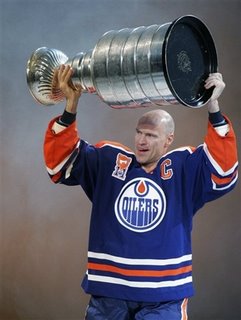 I have mixed feelings about Messier hoisting the Cup for his ceremony tonight. My first reaction is that maybe it's a bit of consolation to Oilers fans because they lost another franchise player today.
My second reaction is that what makes Messier so fucking special that he gets the pleasure of hoisting the holy grail at this special occasion when no one else has had the same privilege? (Or am I mistaken and another legend has had the same privilege?)
I will dispute any Messier-hater because I think that he really was a great leader-one of the best of alltime. The lackluster finish to his career takes way from the great things that he accomplished in his prime no doubt.
It's just that I feel that guys like Henri Richard, Gordie Howe, Bryan Trottier, Wayne Gretzky, Jean Beliveau, etc all should have had the same honor at their ceremonies. Messier skating onto the ice with Lord Stanley made him look like he was the best of all time. He wasn't.
But hey, it's just my thoughts. I don't mean to piss on his parade.
Here is part of the ceremony.
Gad, he sure was an intense and competitive player in his prime.